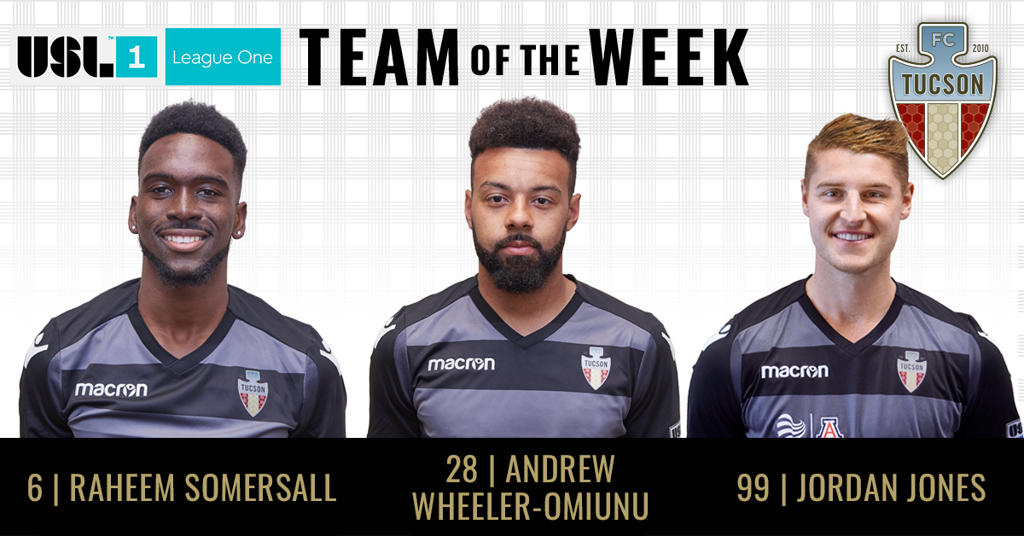 TUCSON (July 9, 2019) — FC Tucson midfielders Andrew Wheeler-Omiunu, Raheem Somersall and forward Jordan Jones were named to the USL League One Team of the Week for Week 15 of the 2019 USL League One season the league announced today.

Wheeler-Omiunu netted the opening goal in the fifth minute in last week’s 3-1 victory over Toronto FC II. Shortly after a throw-in, the midfielder sent a rocket from 30 yards to find the back of the net. The opening strike was the fastest goal scored in the club’s professional era and Wheeler’s second goal of the season. He also made eight recoveries and won 6 of 9 duels.

Somersall, a St. Kitts and Nevis native, earned his first Team of the Week honor after a solid performance against Toronto last week. He controlled the midfield by recording one assist while completing 26 of 30 passes and won 9 of 12 duels.

Somersall recently departed the club to join the St. Kitts and Nevis U23 National Team for an Olympic Qualifier.

Forward Jordan Jones joined the scoring party in the 25th minute to give Tucson an early 3-0 lead. Goalkeeper Carlos Merancio sent a beautiful long ball down the field to catch Jones in stride, who dribbled past a Toronto defender and registered his second goal of the season.  Jones also completed 10 of 16 passes and won 7 of 14 aerial duels.

FC Tucson will be back in action on Saturday, July 13th when the club travels to Lansing, Michigan to take on Lansing Ignite FC. Kickoff is set for 4:00 P.M. and the match will be televised via ESPN+.

Fans can watch the match with fellow FC Tucson fans at the club’s official watch party at Gentle Ben’s.