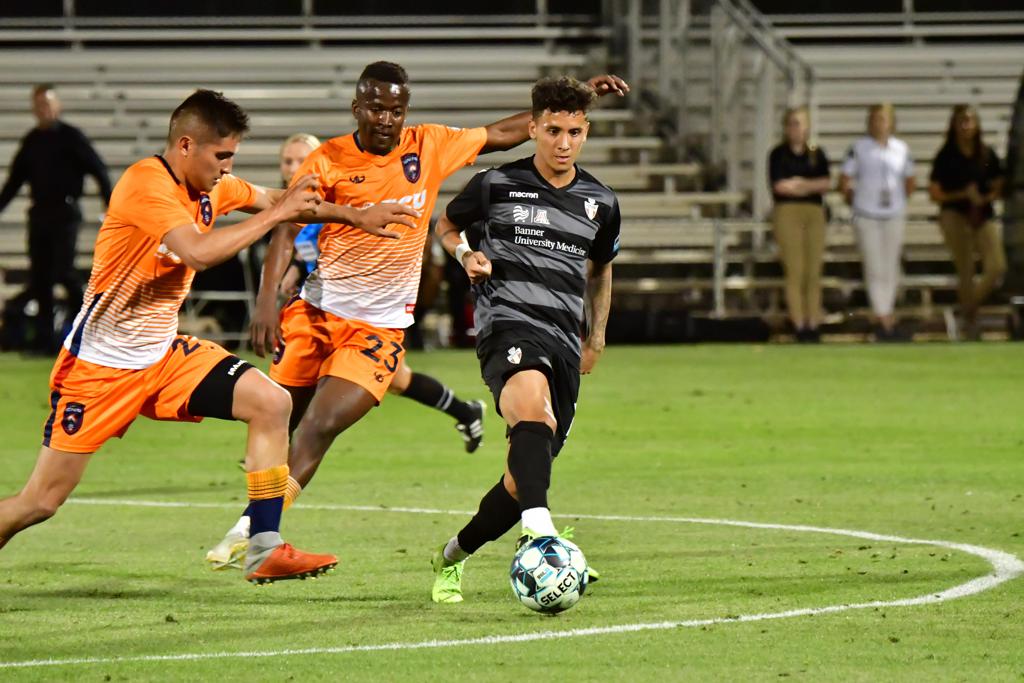 FC Tucson came out on the front foot, pressuring the Lansing backline and creating six shots, two more than the total amount of shots the team took in its last match against Tormenta FC.

The attack finally broke through in the 27th minute. After a blocked Tucson shot attempt, the ball was headed back into the box and took a bad hop past a Lansing defender and to the feet of forward Devyn Jambga. He beat the goalkeeper to the near left post to score the match’s first goal and his first-ever goal as a professional.

FC Tucson maintained the pressure in the second half, peppering the Lansing defense with seven shot attempts. During one attack, midfielder Joey Calistri drew a foul near the top of the box which set up a teammate, and fellow Phoenix Rising loanee, Devin Vega for his second free kick goal of the season to make it 2-0 in the 62nd minute.

Holding to a two-goal lead, Ejimadu got to work, making three of his five saves over the next seven minutes of play. In the 65th minute, he dove to stop a long-distance curling one-hopping shot destined for the lower right corner. Four minutes later, in the 69th minute, he turned away a low, driving, left-footed shot from outside of the box. Ejimadu finished his saving spree in the 70th minute when he lept straight up to punch away a curling shot from about 25 yards away.

FC Tucson will be back in action on Saturday, May 11th, when the club travels to Richmond, Virginia, to face off against the Richmond Kickers. Kickoff is set for 4:00 PM MST. The match will be streamed lived via ESPN+.