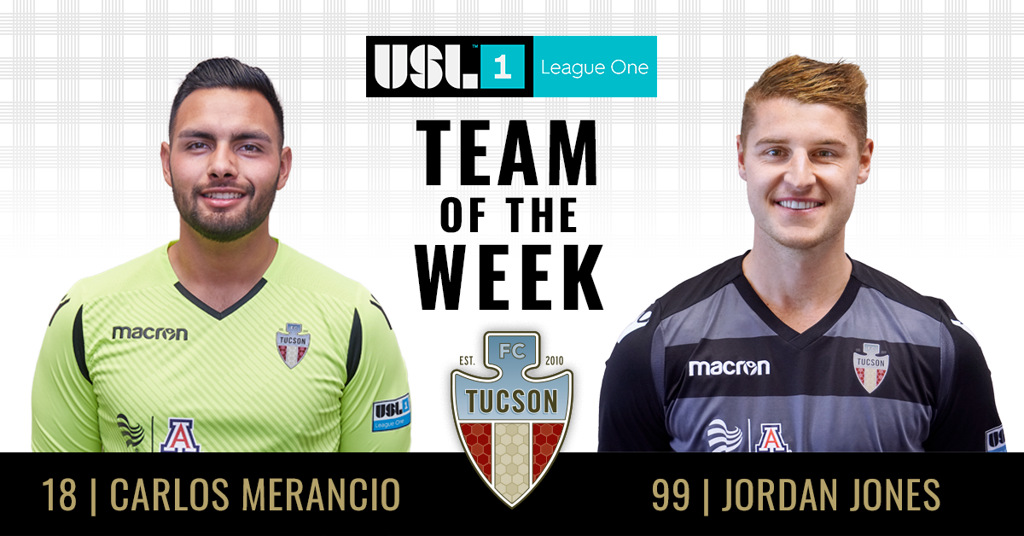 TUCSON, Ariz. (Aug 13, 2019) — FC Tucson forward Jordan Jones and goalkeeper Carlos Merancio were named to the USL League One Team of the Week for Week 20 of the 2019 USL League One season the league announced today.

Jones netted his fourth tally of the season in the 44th minute last Saturday against North Texas SC. Midfielder Jamael Cox connected with Jones on a corner kick to give the Men in Black an early 1-0 lead as they entered the locker room.

Jones currently ranks second on the team with four goals on the season.

Goalkeeper Carlos Merancio had another strong performance against NTX last Saturday. The 20-year-old keeper recorded six saves on seven shots faced, including an impressive double-save in the 29th minute. In seven appearances, Merancio has collected 27 saves on 35 shots faced as well as a save success rate of 77.1%.

FC Tucson will be back in action on Saturday, August 17th, when the club travels to Statesboro, Georgia to take on South Georgia Tormenta FC. This will serve as the final regular-season match between the two sides.

Kickoff is set for 5:00 P.M. and the match will be streamed via ESPN+.

Fans can watch the match with fellow FC Tucson fans at the club’s official watch party at Gentle Ben’s.