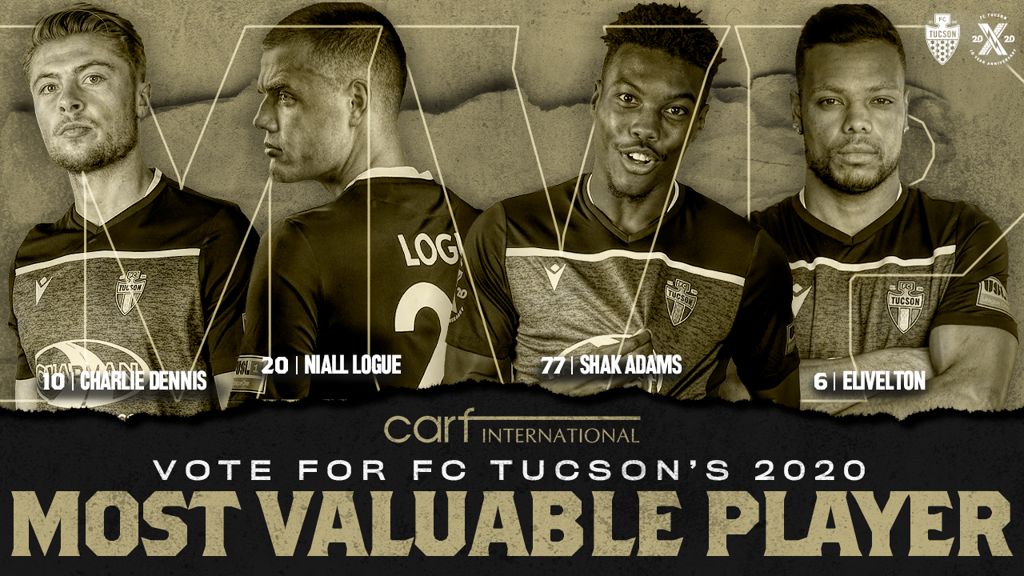 TUCSON, AZ. (Thursday, Oct. 15, 2020) – FC Tucson has announced today that the club has formally opened voting to fans to decide FC Tucson’s 2020 Most Valuable Player of the Year, presented by the Commission on Accreditation of Rehabilitation Facilities (CARF). Shak Adams, Charlie Dennis, Niall Logue and Elivelton are the four nominees for the award, selected by the club’s technical staff.

Fans can vote for FC Tucson’s 2020 Most Valuable Player of the Year, presented by CARF, at our website, FC Tucson app, or on Instagram at @FCTucson (vote here and be entered for a jersey giveaway). The MVP award will honor the player determined during the USL League One Regular Season to be the most important to the success of the team.

The winner will be given the award for the FC Tucson 2020 MVP Award after the team’s final match of the regular season, on Saturday, Oct. 17 against Orlando City B at Kino Sports Compex (7 p.m. PT, ESPN+, Watch Party at El Toro Flicks Carpool Cinema).

Shak Adams leads the team in goals and is USL League One’s 7th leading goal scorer with four goals. Adams has tallied four goals on 16 shots with two assists in just 11 appearances of his first year as a professional.

Charlie Dennis’ four assists lead the team and place him tied for third place on USL League One’s assist leaderboard. In 14 appearances, Dennis has created the most chances for the team and is in third place in the league with 29 chances.

Niall Logue’s distribution takes the #1 spot in USL League One with 915 passes, over 100 passes ahead of the #2 spot on the leaderboard. Logue, captain of FC Tucson, leads the team in clearances (61), blocks (13), and is tied for the lead in tackles won.