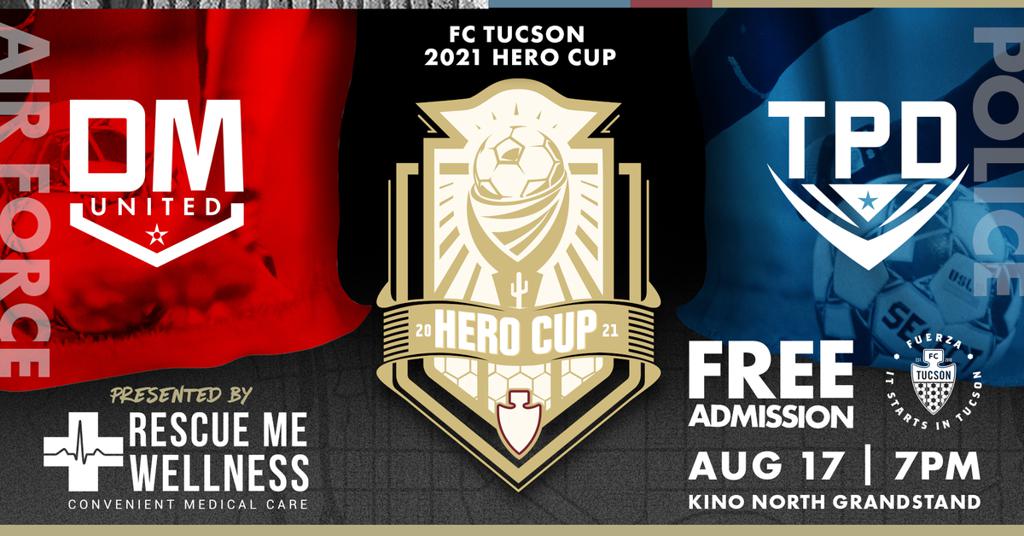 TUCSON, Ariz. — Tucson’s bravest will face off on the pitch as airmen from Davis Monthan and officers from Tucson Police Department compete for the inaugural Hero Cup presented by Rescue Me Wellness on Tuesday, Aug. 17.

The match between DM United and TPD is free for the community to attend and will be hosted by FC Tucson at the Kino North Grandstand at the Kino North Sports Complex on Ajo and Country Club Road near the Sam Lena Recreation area.

The genesis of the Hero Cup came from separate discussions FC Tucson had with TPD and Davis Monthan regarding community-based initiatives. From those conversations came the discovery of a mutual passion for soccer.

“We felt a sense of duty to bring these two critically important institutions together through the beautiful game,” said Amanda Powers, president of FC Tucson. “We want to highlight to young boys and girls that the love for the game never ends for men from all ages, backgrounds, and careers.”

DM United has an Adult Metro League team that plays competitively throughout the year and TPD has dozens of passionate soccer fans who play for fun and still serve on the force.

“It’s great to see the community support from FC Tucson,” said Lt Col Erik Baker, DM United Coach.  “Our players are excited to get out on the pitch and show what they can do”

Tucson Police officer Roman Acosta has long valued the power of soccer to unite the community. Before joining the police department, Acosta played for FC Tucson in the club’s first season in 2011. He has also served as a coach in the FC Tucson Youth Soccer program. Acosta spent six years as a patrol officer in Tucson’s southside and now serves in TPD’s recruiting and public information office

“Soccer was my first love. From my playing days, to my time as a coach, I’ve been very lucky to be a part of our Tucson Soccer Community,” said Acosta. “The Hero Cup is just one more example of what makes this community great, and I’m really looking forward to being a part of it!”