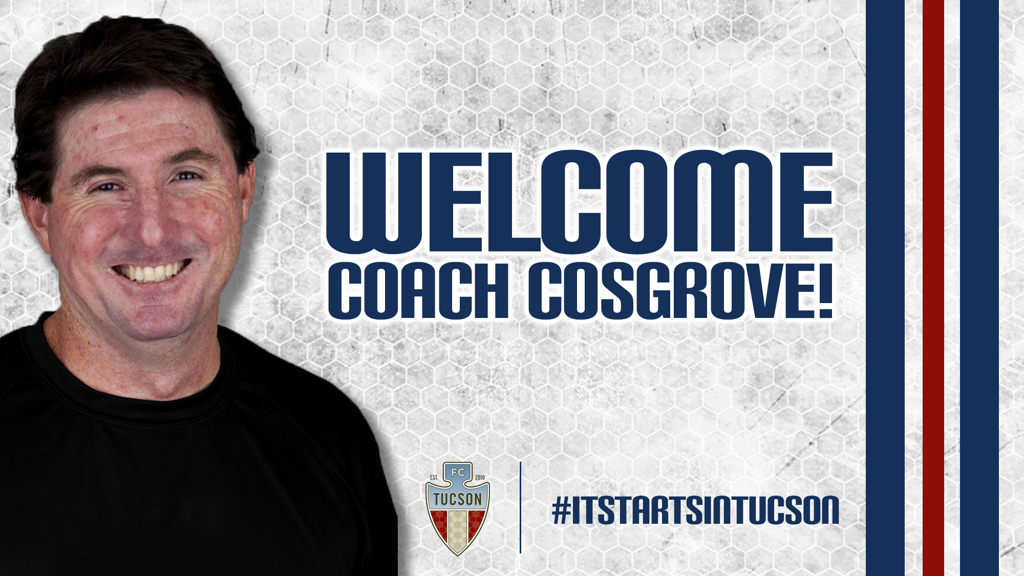 TUCSON (February 21, 2018) — FC Tucson announced today it had named David Cosgrove as the club’s new head coach. Cosgrove is the men’s head coach at Pima Community College and is the school’s all-time leader in wins during his tenure (1999-2017). Cosgrove is also the director of coaching and a board member at Tucson Soccer Academy. Cosgrove is the third head coach in club history, following in the footsteps of Jon Pearlman and Rick Schantz. Cosgrove will remain at his positions with TSA and Pima Comunity College.

“In order to maintain FC Tucson’s excellence on the pitch it was important for us to find a head coach who had strong ties to the local soccer community and we couldn’t think of a better person than David Cosgrove,” said Phoenix Rising Chief Operating Officer Bobby Dulle. “Between his work with Tucson Soccer Academy and Pima Community College, David has a unique view of the development cycle of soccer players in Arizona and he is going to contribute in a positive way to our overall goal of raising the quality of soccer in the state to its full potential and beyond.”

During his time with Pima Community College, Cosgrove has been named the ACCAC Coach of the Year six times and the West Region Coach of the Year four times. His teams have finished the season in the Top 5 in the country five times (1999, 2011, 2014, 2015, and 2017)
was the national runner up in 1999. Cosgrove has also led Pima to the national playoffs in 19 consecutive seasons.and

About FC Tucson
FC Tucson, established in 2010, is committed to bringing the highest caliber of collegiate soccer to Tucson and establishing a successful and long-lasting source of pride for city, county, state and country.  In 2012, FC Tucson was named the PDL Rookie Franchise of the Year.