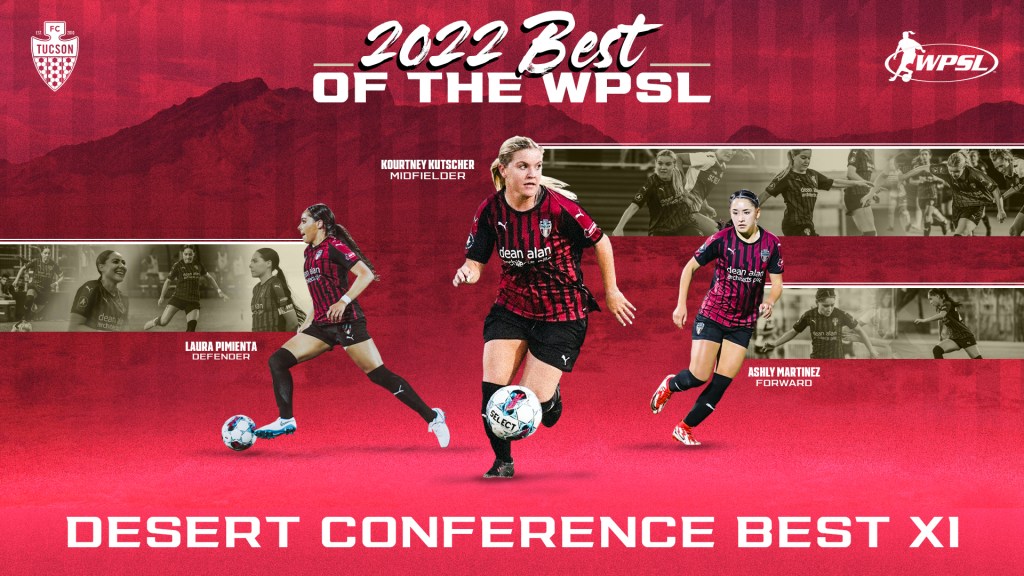 Team Most Valuable Player Kourtney Kutscher was joined by Laura Pimienta and Ashly Martinez on the Desert Conference Best XI announced by the Women’s Premier Soccer League this week.

Kutscher helped power FC Tucson to a 3-1-3 record, and her performance on both offense and defense earned her the team’s top honor.

Laura Pimienta was selected to the all-star team for the second season in a row. The team’s defender of the year, Pimienta also led FC Tucson in assists.

First year player Ashly Martinez, FC Tucson’s offensive player of the year, was selected to the all-conference team as a forward.

In addition, FC Tucson was honored Tuesday evening by the City of Tucson. Tucson mayor Regina Romero presented head coach Kelly Pierce and several of her players the proclamation that August 23, 2022, was FC Tucson Women’s Day.

Today, I proclaimed August 23rd @fctucsonwomen's Day! The talented squad of #FCTucsonWomen consistently go on to professional careers and are an inspiration for #Tucson youth. ⚽️🌵 pic.twitter.com/U5nHZ2m5rU 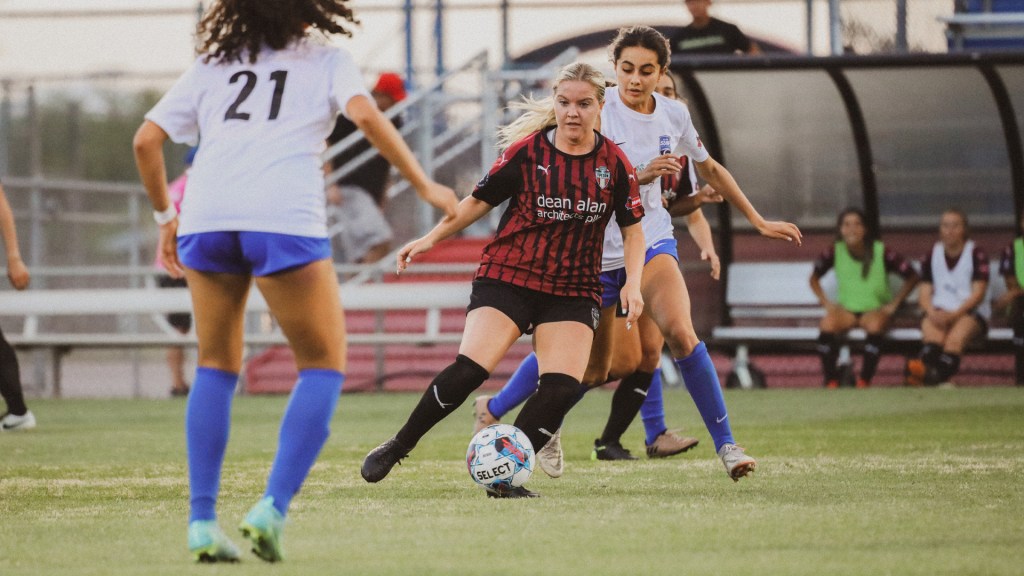 Kelly Pierce can point to one specific reason FC Tucson was in the hunt for its second straight WPSL Desert Conference championship all season.

For the FC Tucson coach, it wasn’t necessarily who scored the goals or who kept the ball out of their net. But, rather, it came down to the person who was equally responsible for the team’s success on both ends of the field: Kourtney Kutscher.

“She played a pivotal role in why we didn’t get scored on or why we created chances,” said Pierce. “She always made an impact on both sides of the ball.”

In recognition for her impact, Kutscher is the 2022 Most Valuable Player.

The Temecula, California, native played collegiate soccer at Cal St. Northridge. She started every game her senior year in 2016, earning All-Big West Second Team honors and had scored a pair of game-winners for the Matadors.

She finished with 491 minutes played after joining FC Tucson following the season opener.

“She was a great role leader and role model for the team,” said Pierce. “Kourtney is a very smart, technical player; a hard-working, dedicated team player. She is what every coach wishes for in a player.” 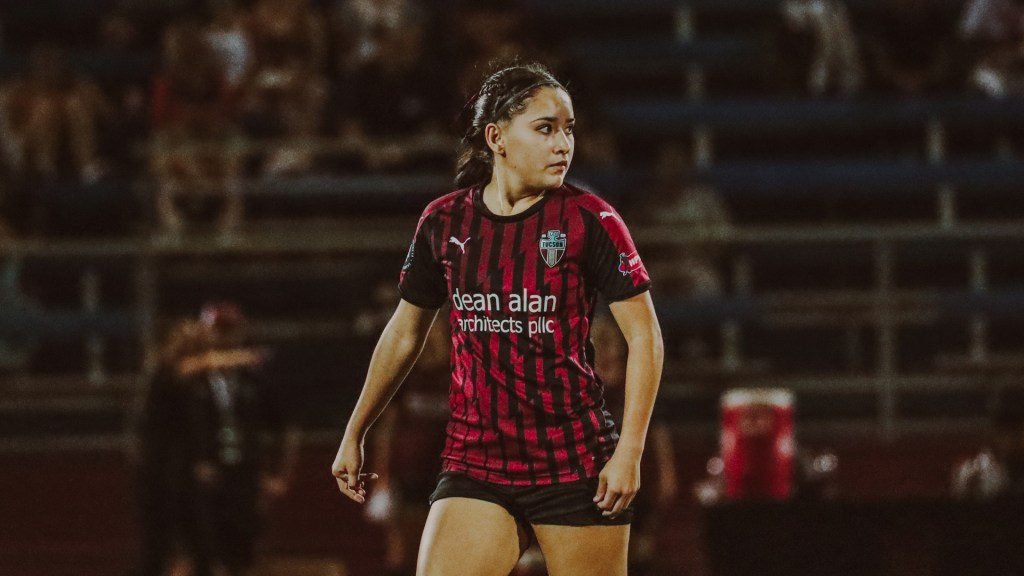 Ashly Martinez made an immediate impact with FC Tucson.

The 19-year-old from Coahuila, Mexico, scored in her very first match with the club – lifting FC Tucson to a 1-0 win at El Paso Surf. Martinez finished with a team-high two goals and added an assist. She was selected as FC Tucson’s 2022 Offensive Player of the Year.

ASHLY MARTINEZ GIVES US THE LEAD 🤯

Martinez joined FC Tucson after having been selected to the U15 and U17 Mexico National Team, and representing her country in the CONCACAF tournament in Orlando, Florida.

The midfielder played for Club Santos Laguna in LIGA BBVA MX Femenil during its 2019-20 Apertura season, scoring three goals in 11 appearances. Injury sidelined her for the ensuing Clausura, but she bounced back strongly with her performance in Tucson. 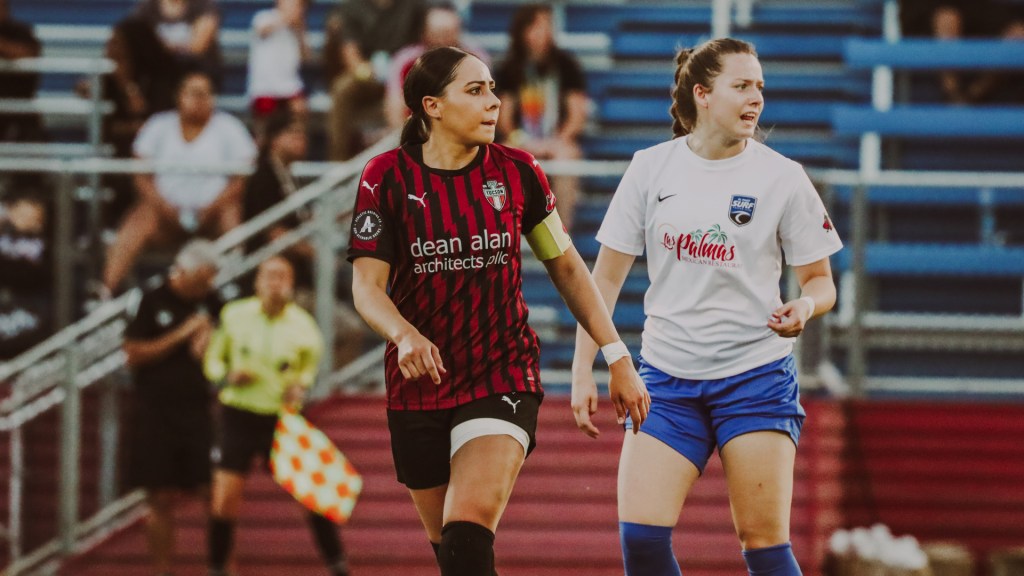 If there was one constant for FC Tucson this season, it was the team wasn’t giving up goals.

FC Tucson allowed a Desert Conference low six goals, including three straight shut outs to start the season. And a large part of the credit for that defensive prowess goes to team captain Laura Pimienta.

The club veteran was selected as the Defensive Player of the Year for FC Tucson.

Pimienta was second on the team with 588 minutes played, behind only her sister Priscilla. Laura Pimienta, who was the 2021 Defensive Player of the Year for WPSL’s Desert Conference, also led the team with two assists this season. 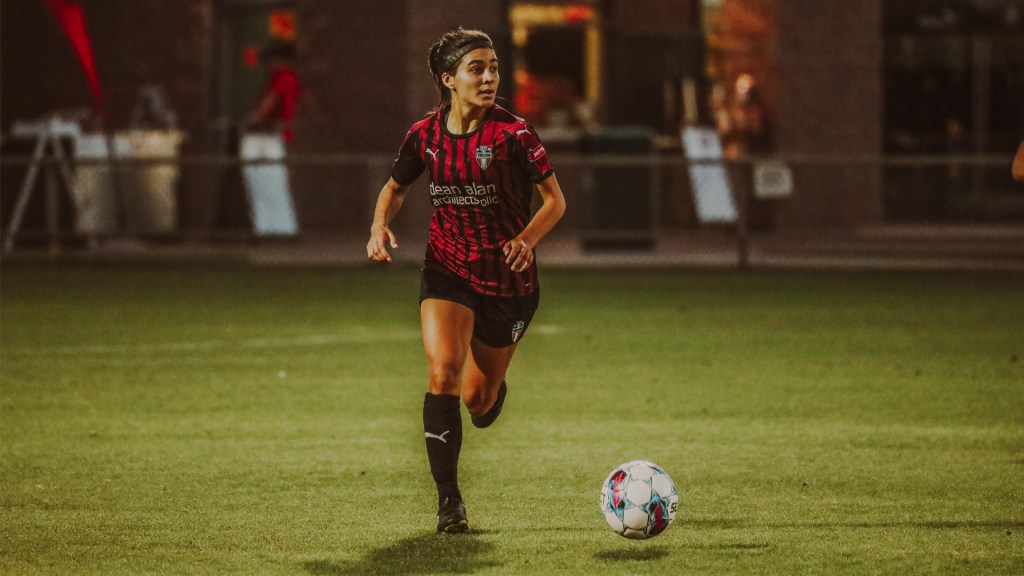 Naija Bruckner made an immediate impact with FC Tucson.

The Tucson native assisted on the game-winner in the club’s season opener, and then delivered the game-winner in FC Tucson’s ensuing 1-0 win over El Paso Surf. She finished third on the team with 573 minutes played and proved to be a consistent threat for the FC Tucson offense.

Bruckner was selected as the Newcomer of the Year for FC Tucson.

AND NAIJA BRUCKNER GIVES US THE LEAD 👏

Bruckner, a graduate of BASIS Tucson North, won a pair of state titles (2019 and ’21) with FC Tucson Youth 04 Girls Black. She is on the roster at Division I Rice University in Houston. 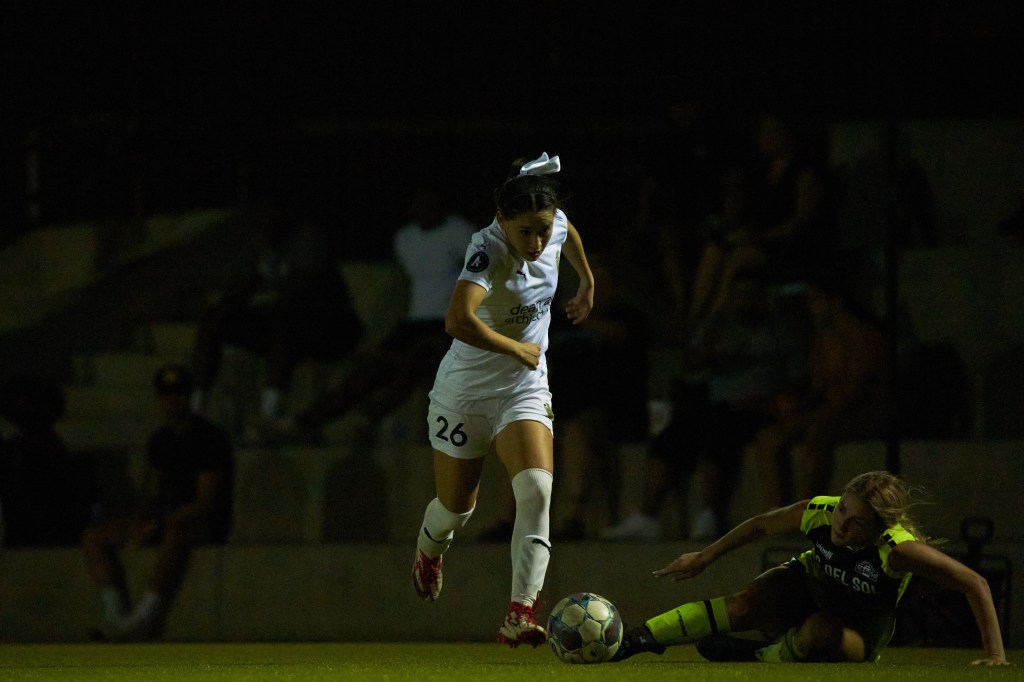 FC Tucson’s defense of its WPSL Desert Conference championship fell just short as it ended the regular-season with a 1-1 draw against Phoenix’s SC del Sol.

Needing a win to claim its second straight title, FC Tucson scored first when Meredith Scott knocked home a pass from Lindsay Hubbard midway through through the first half. While SC del Sol maintained most of the possession in the first half, it was FC Tucson that had the more dangerous opportunities and, ultimately, was the one to convert.

SC del Sol, however, scored in the first minute of the second half and then weathered a number of late chances from FC Tucson to close out the draw it needed to clinch its first title in the club’s 12-year history.

A win would have put FC Tucson level with SC del Sol at 16 points apiece and Tucson would have owned the tiebreaker. However, the second half goal from the Phoenix side ultimately sunk those hopes. The two squads also tied earlier in the season at Kino North Stadium when SC del Sol scored twice in the final five minutes to salvage a 2-2 draw.

Tucson’s WPSL season has concluded. SC del Sol will represent the Desert Conference at the West Region, which will be hosted by the PacNorth champion next weekend. 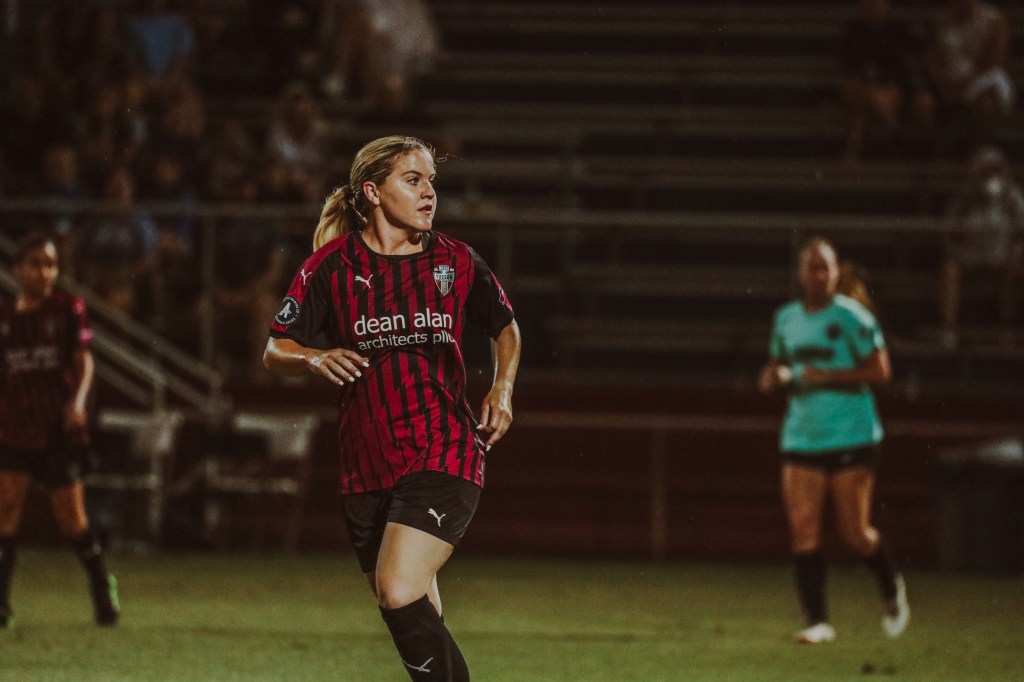 The WPSL regular season concludes this weekend, and the Desert Conference title and a playoff spot are still in the offering for FC Tucson.

Tucson head up to Phoenix on Saturday to face-off against conference leading SC del Sol in its final match of the season at Reach 11 Soccer Complex. Kick off is set for 7 p.m.

Tucson will look to bounce back after losing in its last match to second-placed Arsenal 1-0, despite holding a 14-3 shot advantage in the first half. FC Tucson hit the hit the crossbar three times, before Arsenal scored the game-winner on a scramble in the box off a corner kick.

The last time Tucson faced SC del Sol the teams tied 2-2 with the Phoenix-based club netting goals in the 89th and 93rd minutes to erase a 2-0 deficit. 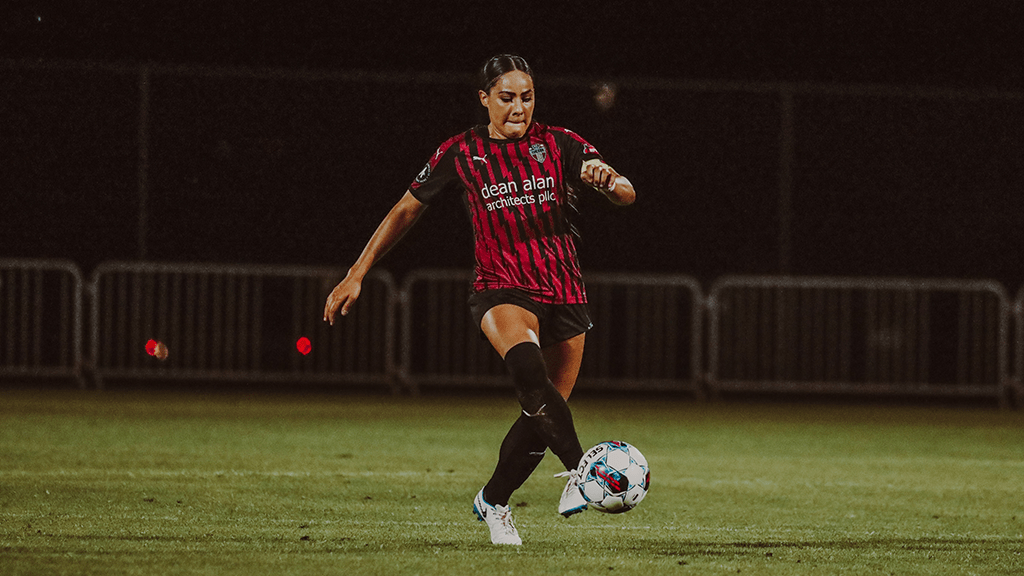 FC Tucson did everything it needed to do Friday except catch a break.

Despite holding a 14-3 shot advantage in the first half and posing a seemingly constant threat to score throughout the 90 minutes, FC Tucson was stymied by Arizona Arsenal’s goalkeeper and the crossbar in a 1-0 loss.

The defeated ended FC Tucson’s unbeaten streak in the WPSL at 18 and put a serious dent in its quest to repeat as Desert Conference champions.

“It’s gonna hurt a little bit, but it’s a part of the process,” said FC Tucson head coach Kelly Pierce. “If we don’t learn from our mistakes, we’re not going to grow, we’re not going to improve. So, this one is going to sting. We move on because we have a huge game moving forward. The result doesn’t show it but we did have a lot of good moments.”

Arizona Arsenal scored in the 62nd minute on a scramble in the box off a corner kick.

It would be all the Phoenix-based club would need as goalkeeper Jazz Brass was credited with nine saves, including stopping a breakaway in the first half, and FC Tucson hit the crossbar three times.

Friday’s match marked FC Tucson’s first defeat since dropping a 3-0 match to Albuquerque Sol on June 9, 2019. It’s the first regular-season loss at Kino North since a 2-1 defeat to LA Galaxy SD in the 2018 season opener on May 31, snapping a 13-match unbeaten streak at home.

FC Tucson (3-1-2) wraps up the regular season next Saturday against SC Del Sol (4-1-1) at Reach 11 Soccer Complex in Phoenix. Arizona Arsenal (4-1-1) plays SC del Sol this Saturday, and then finishes its season next Friday against Atomic City. 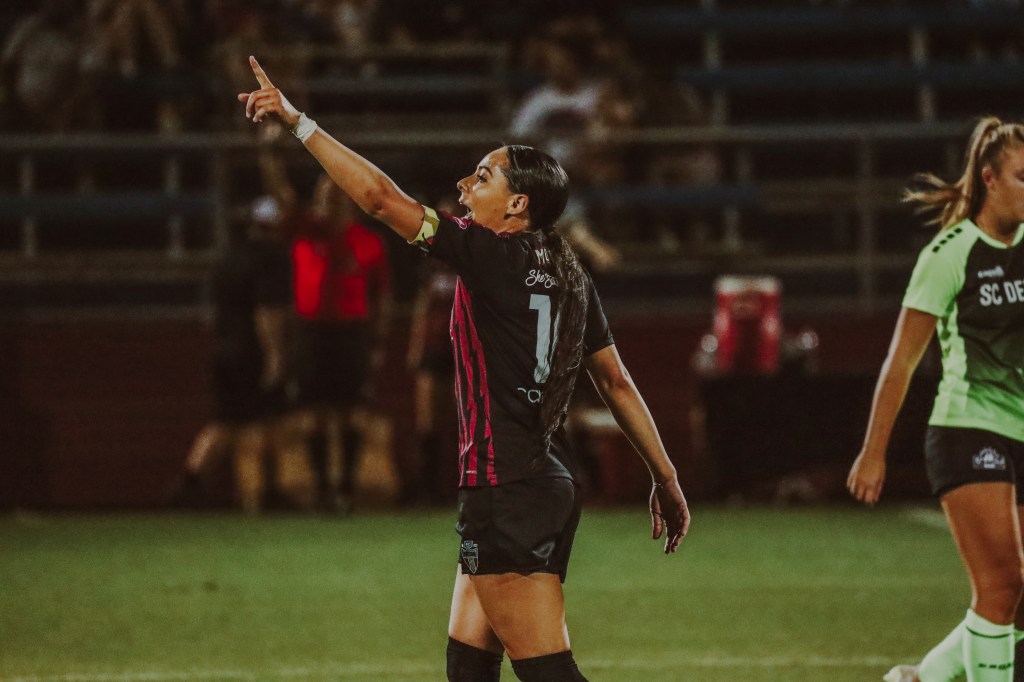 After last week’s match against Atomic City FC was canceled due to inclement weather, FC Tucson looks to shift its playoff push into high gear against Arizona Arsenal SC.

Tucson’s final home match this season is set to kick off at 7 p.m. at Kino North Stadium on July 1. (BUY TICKETS)

The club will look to secure all three points against the Phoenix side, after dropping two in its last meeting on June 17. AZ Arsenal opened the scoring in the 27th minute, but Tucson responded with captain Laura Pimienta finding Ella Rustand early in the second half to bring the two teams even once again.

The hosts took the lead once more in the 60th minute, but Pimienta found another FC Tucson forward, Aryanna Sanchez, who sent the ball into the net to end the game in a 2-2 draw.

In its final match of the season, FC Tucson heads to Phoenix to face off against league leaders SC del Sol (13 points) on Saturday, July 9. Fans can catch the match’s live stream on FC Tucson’s website. 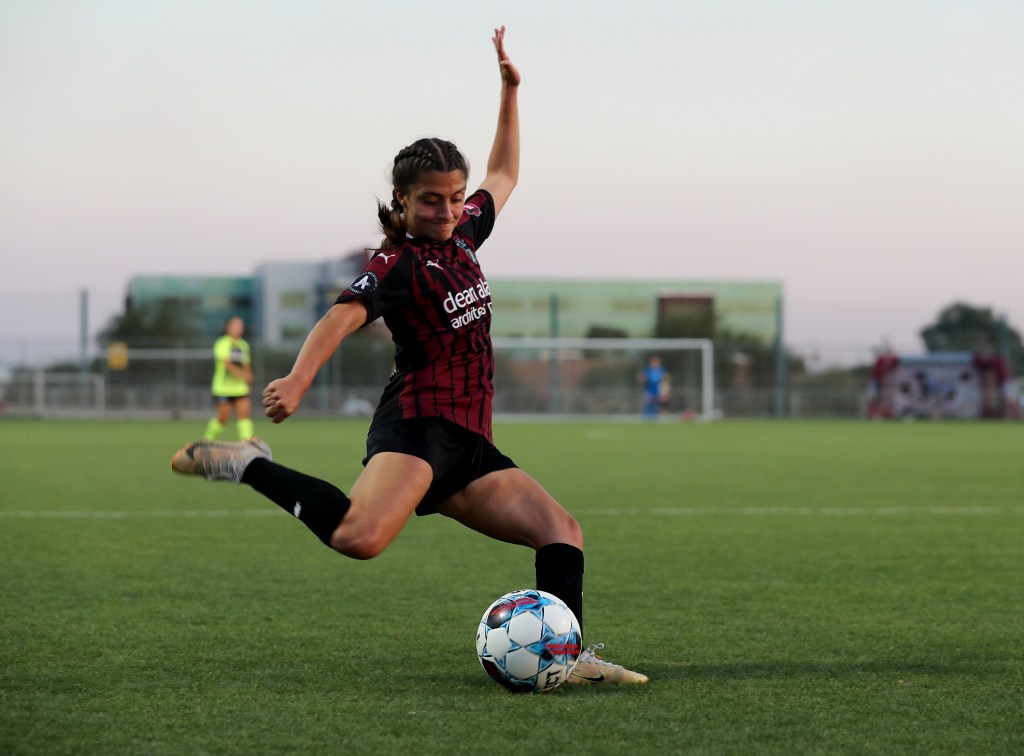 FC Tucson welcomes Atomic City FC on Friday with confidence as the club looks to continue its unbeaten run and push for the playoffs.

The club is unbeaten in its last 18 matches, going back to 2019. Tucson won all three of its last meetings with Atomic City, outscoring the club 8-2.

It will look to do the double against Atomic City when the two teams face each other Friday at Kino North Stadium. The WPSL matchup kicks off at 7 p.m. (BUY TICKETS)

FC Tucson grabbed a 2-2 draw against SC del Sol in its last match. Forwards Ashly Martinez and Kate Connelly grabbed two great goals to put Tucson up 2-0, and goalkeeper Hope Hisey came up with a stellar penalty save to keep SC del Sol out of contention for most of the match. However, a late push from the visitors saw the points split between the two sides.